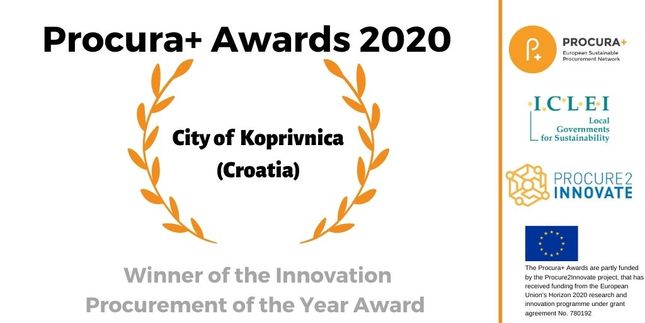 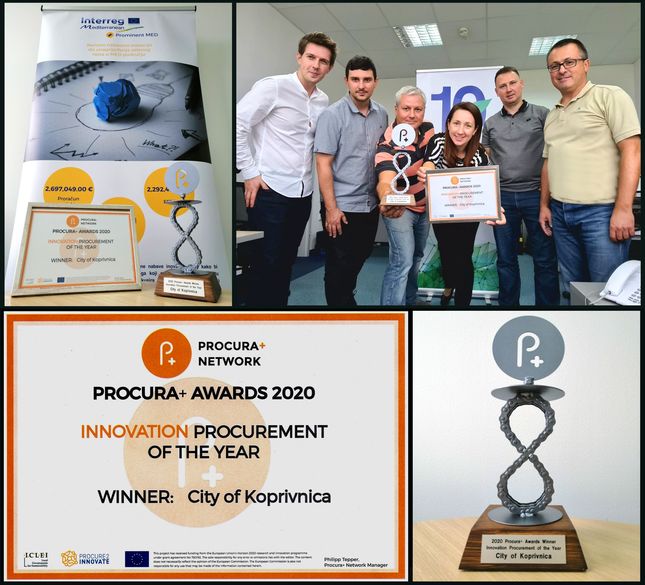 The 2020 Procura+ Awards (link: https://procuraplus.org/awards/) ceremony saw two public agencies and two cities gain recognition for their biggest successes in public procurement in four categories. The event took place on 1 October 2020 as part of the Digital Conference “Environmental Considerations in Public Procurement in Europe”, hosted by the German Federal Ministry for the Environment, Nature Conservation and Nuclear Safety (BMU), and the German Environment Agency (UBA).

City of Koprivnica was one of the four winners and was awarded the prize in category "Innovation Procurement of the Year", thanks to their Public Procurement of Innovation for a complete reconstruction of a building, which was conducted in partnership with Regional Energy Agency North as a part of our joint project Prominent MED, Interreg Mediterranean. The runner-up in this category was the City of Malmö (Sweden). With this award, the Croatian partners found themselves in the company of previous winners from the same category: City of Frederiksberg (Denmark) - 2019, City of Rotterdam (Netherlands) - 2018 and Ministry of Defence Netherlands – 2017.

The market dialogue to inform and involve market actors, in this first of its kind in Croatia process, to perform an extensive reconstruction of a prefabricated kindergarten building was positively assessed by the Jury. “We are truly honoured to receive the Procura+ Award. This type of public innovation procurement is the first to be conducted in Croatia, and being honoured with this Award is a remarkable confirmation that we are heading in right direction.” said Mr. Mišel Jakšić, Mayor of Koprivnica, in his thank you speech during the award ceremony.

This PPI process was prepared as a part of the project Prominent MED, Interreg Mediterranean, which main goal was to test the PPI process in small MED municipalities. The reconstruction consisted not only of energy renovation works, but also of a complete reconstruction of the interior, including bathrooms, water supply and drainage system of the building. Due to the main restriction of a maximum of 120 days for project design and reconstruction works (of which a maximum of 80 days for works), the approach required innovative solutions in the form of Design&Build contract. The project team thus had a very creative job to implement the project, which was a combination of a demanding procurement process and an effective approach to project designing and implementation of works.

The procurement delivered innovative and replicable solution for external, internal, energy efficient and functional transformation of a 35 year old prefabricated wooden kindergarten, and the innovation resulted from the combination of existing materials and basic techniques not previously offered or used in the market.

The final impact of the procurement and implemented solution was completely transformed and improved kindergarten with extended lifetime of 25+ more years for the cost of less than 500,00 € per square meter, which is less than 50 % of a cost of a new building. The solution also resulted with 61 % savings on heating energy, 66 % savings on primary energy and 66 % less CO2 emissions, all per year.

Finally, instead of demolishing the old building and constructing a new one, which both would be a substantial cost, we have achieved one more goal. By transforming and upgrading the building which was considered to be near the end of its useful lifetime we have diverted from landfill the whole building with net area of 820 square meters, thus strongly contributing to general sustainability goals in the region.

Regional Energy Agency North and City of Koprivnica are truly honoured to be receiving such an important professional recognition for their achievement in the field of Public Procurement of Innovation. This is not only a huge recognition for their joint team, but also for the Prominent MED project as such – it's a big and valuable confirmation of Prominent MED success.

All news
Back to top